In preparation for a trip to Junction Arts Festival later this year, I’ve been doing some more thinking about saunas.

After closing the City Pool in 2013, Newcastle City Council has opened up to offers “to secure the future of Newcastle’s City Hall and City Pools” (full details here – there’s a deadline looming for anyone with commercial interest to apply.)

More importantly though, and steeled against the sad fact that reopening the pools is most probably unviable, a small but dedicated group are fighting to restore the Turkish Baths, having secured a loan to look at feasibility and working with the team from Jesmond Pool. I’m a big supporter of their plans. They have a website, Facebook page and twitter – I recommend checking them out.

On Friday evening, I went to a super interesting talk at New Bridge Project from Mikey Tomkins (@edibleurban) – he’s created “A Guide to the Potential For Urban Agriculture In Newcastle Upon Tyne.” It’s part of a series of interventions he hosts in cities worldwide, exploring and imagining urban food gardening systems that could use both currently disused space, and future unneeded buildings, such as multistorey carparks.

Since then, I’ve been wondering whether there is a genuine, not just imagined, potential for a successful aquaponics business in the City Pools… fancy a chat team save-the-turkish-baths, Mikey?

At the end of last year, I took part in a group exhibition at Generator Projects in Dundee, at which a first live experiment for Sauna Nation, one of the Wunderbiz ventures, was launched, along with the Dundee Sweat Challenge. (Turkish Bathers – should we do a Newcastle version?)

Sauna Nation Test 1 was a DIY steam room, designed to a brief from the Generator committee who struggle to make the converted warehouse they occupy warm, even in summer. Could we possibly manage to get Generator warm enough for us to take off our layers, especially in winter?

Simply put, we made it work. Though temperatures struggled to soar super high, it was warm enough for us to have a cosy chat in our bathers. One lady even came in bather-less, though she kept her towel on. (Artist-led nudity wasn’t on the agenda this time).

Sauna Nation Test used the format of a large scale Event-Tent-Day-Room (ie this) – an enclosed, waterproof and transportable space tall enough to stand in. If a tent can keep weather out, it could keep steam in, right? And so it did. Our steam was generated by a large wallpaper stripper inside the tent. We positioned its steam-head in a bucket to catch excess water.

Turns out, great minds think alike. While planning, I found some incredible DIY steam room videos online, thanks to some tips from my friends Debbie and Mat. This one has a cute dog in it – no guarantees on the savouryness, or otherwise, of any suggested videos alongside it.

The Generator committee did a stellar job building changing cubicles from reclaimed wood and creating a waterproof seal with plastic dust sheets, aiming to retain as much of the steam and warmth as possible, and ensuring the rest of the space didn’t get wet.

Here‘s a nice bit of local press And here the zine I produced for the exhibition. It included some of my musings, a route I’d planned for the Dundee Sweat Challenge that mapped the four ‘public’ saunas I found, and some pics from the incredible West Protection Walls Baths, which are sadly no longer.

Click on the images below for a read of the zine. 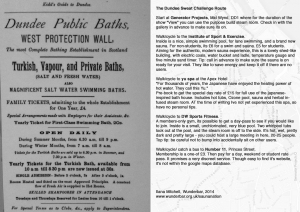 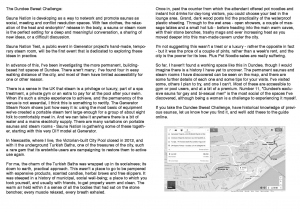 « Greenwich Edicures Some foundations for the Wunderbar Foundation »